Telling Your Employer You Are Pregnant – During COVID 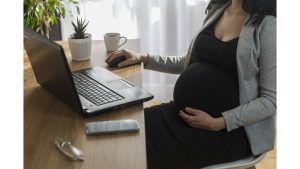 I’ve gotten some questions lately about how and when to tell your employer you are pregnant – particularly during this COVID era of working from home.  The most obvious difference, for many new pregnant moms, is of course that their colleagues don’t see them in person every day.  So a pregnancy may simply not be as visible.

Being a few years out from this question myself, I interviewed some Mindful Return alums who went through the new baby news-sharing process during the pandemic.  Here’s what they told me.

Pre- and post-COVID life are hard to compare sometimes, no?  For those mamas who had older children, I asked them to compare their experiences announcing their pregnancies at work in the “before times” versus now.

Largely, they noticed no major differences.  That is, other than those things that can differ from one pregnancy to the next anyway.  How you feel, for example, may change baby to baby.  One mama noted that while she wasn’t as sick this time around, she was extremely tired during her first trimester.  In her case, she noted that because she was working from home during COVID, “no one noticed that I put work aside for a mid-day nap and worked later to make up for it.”

Another expectant mom said that because she’s not in the same office as her manager, many of her current interactions are similar to before.

The reduction in gawking can be a relief.  (One mama said, “I didn’t have a bunch of people subconsciously checking out my belly!”).  But moms do experience some nostalgia for the in-person losses.  “I didn’t get all the fun of using the expecting mom parking spot, or people holding the door for me, and carrying stuff for me,” the same mom reflected.  “But I also was home, so I was able to rest a bunch more, which was great.” 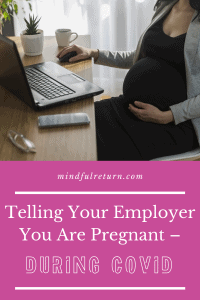 When They Announced Their Pregnancy

There’s no magic or “correct” moment to tell your employer you are pregnant.  As with so many things in parenthood, you really need to get a sense of what feels right for you.  Then go for it.  Of the mamas I interviewed, their announcements ranged from when their pregnancy was 8 weeks along on the early side, to 19 weeks on the later end.

The mom who announced at 8 weeks told only her manager in the initial conversation.  Then, she waited until 12 weeks to tell the rest of her team.  She made the decision to tell her manager at 8 weeks, because they were in the middle of a project-planning process for the year.  She said she “wanted to give my manager as much time as possible to work through a staffing plan.”

Another mom who announced her pregnancy around 13 weeks, said she wanted to wait until after the NT scan and NIPT blood test showed she had a healthy, viable pregnancy.

And a mom who waited until 17 weeks said she “wanted to wait as long as possible.”  Why?  Because she didn’t want it to affect her role at work.  “I was worried people wouldn’t give me responsibilities,” she admitted, “if they knew I was going to take maternity leave.”

What Medium to Use?

Face-to-face is definitely the way to go when telling your manager and team that you’re pregnant.  In-person is still, in fact, possible for some people.  If you’re back at an office, you can schedule an in-person meeting.  Or even if not, give some thought to the socially-distant outdoor walk option.

Live, virtual meetings do seem to be the more common approach these days, though.  Most of the mamas I interviewed shared the news via Zoom or Microsoft Teams.  One did it on a weekly conference call.  And she also told both HR and a partner she didn’t communicate with all that often via an e-mail message.

Concerns These Mamas Had About Their Announcement

A Care.com study recently found that 47% of women are still afraid of telling their boss that they’re pregnant.  Oh, how I wish we had evolved as a culture to a world where it was a completely normal thing to do to let people know you had created a human life.

My own musings aside, the mamas I interviewed certainly reflected these stats.  Half of them didn’t really have any concerns, other than the practical issues of coverage during their leave.

The other half shared deeper fears.  “I was concerned with a lack of support, and being pulled off projects/trials,” one new mom said.  Another reflected that “I mostly was worried about the rest of the leadership team treating me differently and being disappointed that I took my role 6 months earlier, knowing that I might get pregnant.”  Yet another was concerned about how her announcement would be perceived, given that she had recently started a new job.

So How Did the “I’m Pregnant” Conversation *Actually* Go?

Despite their fears and concerns, of the group of mamas I interviewed, every single announcement turned out to have been well-received at work.  “Everyone was happy for me,” said one mom.  “There were no issues.”  Another mama said her manager “was happy for me and only focused on the positives and the personal aspects in that first conversation.  He also agreed to keep the news to himself until I told others.”  And yet another learned that her manager’s wife was also expecting – so they had lots of “baby talk” to commiserate about.

Here’s my favorite story, though.  One mama noted that after her manager congratulated her, the first thing her manager asked was, “What can we do to help you?”  (Clapping loudly over here!!)  This mama was anticipating a difficult pregnancy, and she let her manager know that.  This rock-star managing partner offered her more options to work from home.  Ways to find coverage for her trial calendar.  And the partner let her choose how she wanted to participate in long-term projects, rather than simply taking her off of them.  “She also urged me to take the full parental leave that was available,” said this mom, “because she knew from her own experience that the time at home was so fleeting.”  YES to mamas supporting other mamas!!!

Kudos to all of these managers, who got the tone and messaging right.  More of this, please!!

I also know that this acceptance and understanding isn’t universal.  One of the moms I interviewed noted that she had a completely different experience being pregnant at a prior employer.  “In my experience of telling an employer I was pregnant before COVID, my supervisor at the time said one thing, but did another.  She congratulated me, but then she showed little understanding when I was later diagnosed with gestational diabetes and needed to attend more frequent medical appointments and fetal monitoring. When I brought up arrangements for pumping because I shared an office with a male contractor, that same supervisor told me to pump in the bathroom or in a room across the hall that served as a library for anyone to use.”

Note to managers: lack of empathy for her situation was why she left her prior job!

Specific Advice from Mamas Who’ve Been There

I asked these awesome working mamas for their best advice for those of you about to go through the experience of telling an employer you are pregnant.  I’m quoting them directly, as their words are so powerful.  And their advice is spot-on:

Now Plan for Your Leave, and Take All the Help You Can Get!

Now it’s my turn to congratulate you, mama, on your upcoming arrival!  You can trust that you’ll make the decisions that are best for you about when and how to communicate this news.

Please feel free to lean on Mindful Return to help you with this transition, too.  Some additional resources that may prove helpful include:

You got this, mama.  Know that there’s a supportive community of working moms out there ready to welcome you into the fold.