Pandemic Lessons: How Mom-Life and Work-Life are One and the Same 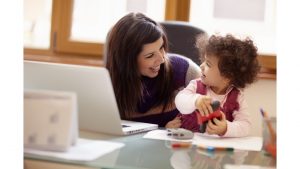 Both as a moment of reflection for all pandemic parents, and in honor of Hispanic Heritage month this month, I am honored to bring you today’s newest Amplifying Voices post on the Mindful Return blog.  My guest today is Maite Fernández Simon, a Mindful Return alum who is originally from Uruguay.  Maite is a mama and an editor at the Washington Post.

Her reflections on pandemic parenthood are spot on. And the contrasts she notes between more community-focused versus individualist societies are eye-opening.  Welcome, Maite!

Note: If you, like Maite, are parenting in a country whose main language isn’t the one you grew up with, please join me on November 18 for a conversation with Masha Rumer, author of Parenting with an Accent: How Immigrants Honor Their Heritage, Navigate Setbacks, and Chart New Paths for Their Children.  To register for the book talk, sign up here or click the purple button below.

“It will never be the same,” my mom often said when I brought up to her my plans to return to work after maternity leave two years ago. Now, as many Americans progressively return to work after a year plus of working from home, I wonder if the same applies to this moment.

Little did I know that both would meld beyond recognition. And that instead of picturing two distinct boxes (one often hiding from the other, as I wanted to project the image of a professional employee who was always ready to work), I would start seeing my life as a flowing river fed by strong tributaries. Streams and lakes that converged into a larger body of water. One that never stops and is continuously evolving. 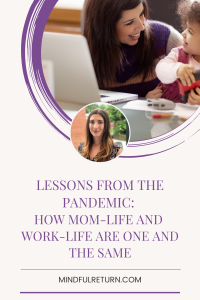 The pandemic has melded our worlds even further. For me, the days blended. Sometimes working too many hours with no commute to signal the workday was done. Sometimes there were family breaks between 9 and 5. The living room couch moonlighted as my desk, when it wasn’t being used as our family gathering spot. Doing the dishes became my way to kill time in between conference calls. And how can I forget those 6 weeks when our daycare closed? (We were the lucky few whose professional lives were only severely disrupted for a little more than a month, I know.) During that phase, my husband and I had to become master planners. We picked which phone calls/meetings we could take, while the other one took care of our rambunctious 2-year-old.

I remember that one work call during the pandemic where my daughter would not let me speak. And she followed her demands for attention with a very loud temper tantrum. I was very embarrassed (heck, mortified!), the first time it happened. The second time I said, matter of factly, that I just couldn’t continue talking because my daughter needed my attention. And muted myself.

The pandemic exposed many fundamental flaws in the systems that organize this thing called life. In particular, one thing became very clear to me: working parents were doing a lot with little to no support. The same can be said of moms returning to work in ‘normal’ (aka pre-pandemic) circumstances.

I’m lucky to work for an employer that offers a very generous maternity leave. One of the best in the industry. At the time I had my daughter, my mom offered to watch her for a month before having her start at daycare. We wanted to save some money, given the prohibitive cost of childcare in D.C.. We also wanted to make sure she was taken care of by someone close to us in her first months of life on this Earth.

As has been reported extensively, the U.S. is among the least generous developed countries when it comes to family leave. Almost all 38 member countries of the Organisation for Economic Co-operation and Development (OECD) provide mothers with at least 14 weeks of maternity leave around childbirth. The exception is the U.S.  The only member country that does not offer paid maternity leave sanctioned by law at a national level, according to OECD’s Family’s database.

The Family and Medical Leave Act (FMLA) passed in 1993 provides up to 12 weeks of unpaid, job-protected leave per year to certain employees. Workers can use that time for the birth and care of a newborn child; in the case of adoptive parents, to care for their child; to care for a family member with a serious health condition or to recover from a personal illness.

As sociologist Caitlyn Collins says in her 2019 book, Making Motherhood Work, low-wage workers tend to have less access to the FMLA than white-collar workers. Not many workers can afford to take leave without pay. Moreover, high-income earners are more likely to have access to paid family leave than low-wage workers.

“The U.S. welfare state centers on the liberal belief that the market provides for citizens’ welfare; the state should intervene only when the market fails. This free-market approach means that adults are encouraged to work and to find private solutions for child-rearing and housework,” writes Collins.

In contrast, the country where I’m from, Uruguay, offers 14 weeks of paid maternity leave for mothers who work in the private sector.  It also provides 13 weeks for those who work in the public sector. Employees can opt for part-time work while receiving their full salary for a few months after the child is born. (Up to 6 months for private sector employees. Up to 9 months for those working in the public sector.)

But aside from the help the government gives new parents, it is common for people in Uruguay to live close to family. As a result, grandparents and extended family become strong means of support. I was practically raised by my nonna, my maternal grandmother, who would often pick us up from school, cook us a lavish lunch, and watch after my siblings and I until my parents came back from work.

That support system is often absent in the U.S., where individualism and self-reliance are praised character traits. In her book, Collins paraphrases economist Nancy Folbre, who says that, in America, having children is perceived as a lifestyle choice, similar to having a pet. “If you don’t have the time or money to care for a pet, or a child, you shouldn’t have one. This line of reasoning meshes well with the tenets of individualism and principles of free-market capitalism,” Collins writes. “The message here is this: if you have a family, it’s your job and yours alone to support it.”

One of the good things about the pandemic exposing our private lives to our colleagues is that we got the chance to see our coworkers as fully dimensional humans, even though it was coming from a flat screen on a Zoom grid. I always marvel when I hear ‘The Wheels on the Bus Go Round’ or ‘The Itsy Bitsy Spider’ playing in the background while a coworker presents on an important project.

Hopefully our collective acknowledgement that our family life takes space, and that we need support, is something that we can take with us beyond the pandemic as we return to the office.

After all, my mom is probably right. Things will never be the same. 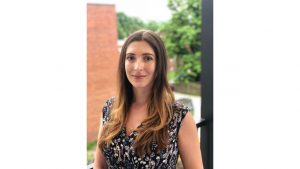 Maite Fernández Simon is a bilingual journalist and digital strategist with more than a decade of experience in digital media. She works as a Senior Operations Editor at The Washington Post, working with the Foreign and National Security sections. Before that, she worked as Engagement Strategist for CQ Roll Call, and previously as Communications Director at the International Center for Journalists (ICFJ). She’s also a digital consultant for independent news organizations in Latin America as part of Velocidad, a media accelerator. She lives in Washington, D.C. with her husband, her 3-year-old daughter and the family’s Patterdale Terrier. You can find her on Twitter as @maits.

November Book Talk! Parenting with an Accent: How Immigrants Honor Their Heritage, Navigate Setbacks, and Chart New Paths for Their Children