Show Up and Use Your Voice, Mamas: What I Learned from Attending the MIT Breast Pump Hackathon 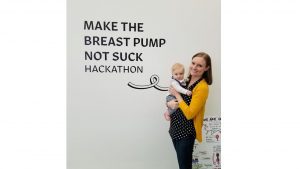 Amanda Norris Ames joins us today with a guest post for the Mindful Return Blog.  A lawyer and mama to two little ones, Amanda recently attended the “Make the Breast Pump Not Suck Hackathon” at the MIT Media Lab.  I love her inspiring example of showing up where it matters, trusting her expertise, and adding her voice to the mix.

When I first learned about the “Make the Breast Pump Not Suck Hackathon” at MIT Media Lab, I was a sleep-deprived mom of a two month old, living more than 5 states away from Boston.  But I also knew I had to apply.

I wasn’t the typical hackathon type.  I have virtually no experience in tech or design.  But as a mother of two children under three, who was breastfeeding and getting ready to return to work after maternity leave, I also knew that if I had knowledge and opinions on anything, it was how much the breast pump did, in fact, suck.  So while I had every reason not to apply, I decided to do it anyway and figure out the logistics later.

When I was invited to participate, I was elated.  Suddenly, the stressful parts of working motherhood felt like hackathon market research.  But I also realized I couldn’t just rely on my experiences.  The conference focused on equity, which meant I needed to seek out other viewpoints.

I asked my networks what sucked about pumping, and the responses started pouring in.  I heard from my closest friends, and from friends I hadn’t talked to in more than a decade.  Also, I heard from dads.  And I quickly heard several themes:

Most people generally agreed that pumping, postpartum care, and the lack of nationwide paid leave really sucked, but I also saw an opportunity for community.  I realized that part of the problem was that while many of us were pumping, it’s still a very taboo conversation topic.  Or as one commenter put it: “I feel breastfeeding is becoming normalized but pumping is not.”

I decided that regardless of what happened at the hackathon, I was committed to talking about the issues facing working moms.  Even when it was somewhat uncomfortable.

I also felt compelled to tackle the loneliness and frustration underlying so many of the comments. I acutely understood the anxiety that accompanied working while breastfeeding.  And I was interested in “hacking” the way we talk about and treat (or, more appropriately, don’t talk about or treat) postpartum mental health issues, which impact 1 in 7 mamas, and potentially even more breastfeeding moms.

I arrived in Boston eager but with a bit of imposter syndrome creeping in. Then, I was greeted by smiling moms with babies in tow (which is good, because I brought mine too), handed a book compiling stories of breastfeeding moms’ struggles, and offered a giant tower of boob-shaped cupcakes.  I realized I was among my people. 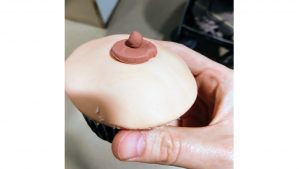 Many were mamas who knew that being a breastfeeding, working mom could be a joy.  And it could also, at times, really suck.  They were moms who were willing to take time out of their busy schedules to say yes to an opportunity to make life at least marginally better for other parents.  Whether we had breastfed for a week or a year, we were the experts–those of us who had lived the breastfeeding and pumping reality day and night.  I realized that, as moms, we know much more than we think we do.

Of course we should be the innovators.  Moms should be designing for moms.

On day two, participants had an opportunity to give 60-second pitches.  I had an idea: I wanted to create an app that helped postpartum moms reduce stress.  But while speaking in front of a courtroom in my day job as an attorney was one thing, pitching my own big idea to a room full of strangers at MIT was terrifying.  I reminded myself I hadn’t flown to Boston to sit on the sidelines.  And I found that, once again, when I threw out my big idea, a community showed up.

I quickly met others interested in similar issues.  We spent the rest of the weekend attempting to hack postpartum mental health and make information and resources about postpartum anxiety and depression more accessible.  I worked with a group of passionate mamas and students from around the country with expertise in psychology, engineering, public health, and law to create a prototype of an app that helped ease postpartum overwhelm and stress.  All while screening for postpartum mental health issues and fostering community.  I left Boston full of energy and ideas for continuing conversations about working motherhood.

I realize that breast pump hackathons and boob cupcakes might not be everyone’s thing.  But I encourage you to occasionally say yes to opportunities that excite you. Even if it seems daunting to add one more thing to your packed schedule, and even if (or especially if!) it’s out of your comfort zone.

Motherhood is big and overwhelming, and we’re so frequently inclined to protect our precious time by setting boundaries and saying no.  But as working moms, I’m learning we gain a unique skill set, and occasionally we need to brush off that sense of imposter syndrome and unleash our energy on the world.  When we share our stories and ideas, we can oftentimes find community. And occasionally make the difficult parts of motherhood suck just a little bit less.

Amanda Norris Ames is the founder of Project Work Mom (follow on Facebook and Twitter), a blog devoted to sharing stories of and resources for working moms.  She lives in Charlottesville, Virginia, with her husband and two children and is a practicing attorney at the law firm of Womble Bond Dickinson.

Want more practical tips on working parenthood?  Check out Lori’s book, Back to Work After Baby: How to Plan and Navigate a Mindful Return from Maternity Leave.