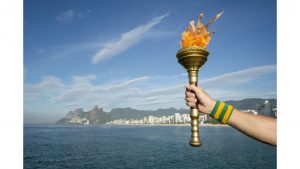 Who in your household is responsible for the invisible labor of making sure the Tooth Fairy shows up?  Today, Dr. Jill Stoddard, author of the new book, Be Mighty: A Woman’s Guide to Liberation from Anxiety, Worry, and Stress Using Mindfulness and Acceptance, joins us on the blog to question some norms about who “owns” what on the home-front.  She challenges us to have those tough conversations about invisible labor that are so important to our mental health and to raising the next generation.  Here’s Jill:

Do you know your partner’s Social Security number by heart? I know my husband’s, but he most definitely does not know mine. This got me wondering—why is that? It didn’t take long to come up with the answer: invisible labor. Just this week I had to schedule my kids with a new pediatrician after an insurance change.  The intake coordinator needed my husband’s Social Security number, because the insurance is through his employer.

I also met with our accountant to do our taxes.  And of course, in preparation, he required our Social Security numbers. I asked some other working moms about this.  And while they didn’t know their spouses’ SSNs, they were the exclusive holders of babysitter, doctor, and dentist contact information, and the Ministers of Family Calendars.

In heterosexual marriages, gender norms are shifting, and men are doing more than ever before.  However, research shows women are still carrying the lion’s share of the household responsibilities, even when they work outside of the home. This gender disparity is greatest in families with children.  And it’s associated with poor mental and physical health outcomes in overburdened women.

My husband does a LOT around the house. We have an excellent groove of shared responsibilities, though, admittedly, it took some hard conversations to get here.  He washes and folds the laundry twice a week.  I put it away.  He gets the mail from the box.  I open and go through it.  He takes out the trash.  I take out the recycling.  We share the dishes, do an even number of pick-ups and drop-offs, and “divide and conquer” when our daughter has a softball game and our son has a hip-hop class. These are all examples of visible labor. 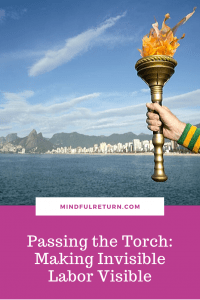 What is Invisible Labor?

Invisible labor involves the mental and emotional load of handling the overall management of a household and children. Women keep the list of what kids need and when.  There are annual physicals with vaccines (don’t forget to bring the vaccination record to the appointment!).  Bi-annual dental visits. Haircuts every 4-10 weeks (which varies by kid, must keep track of them all!). Eye doctors. Orthodontists. And other specialists (which also varies by kid). Annual school registration (don’t forget the forms from the dentist and pediatrician!). Activity sign ups. And schedules for each kid. Summer camps and childcare! And of course each of these things requires research to find the best programs and providers.

When I surveyed my working mom friends, we were unanimously the sole signers of permission slips, RSVP-ers to party invitations, and buyers of our kids’ friends’ birthday gifts.  All of which also requires keeping track of due dates and schedules for said field trips and birthday parties. We were the only ones who paid attention to clothes and shoes getting too small and doing the work of “out with the old, in with the new.” We have more hours on the clock as Santa, the Tooth Fairy, the Easter bunny, and the HBIC of birthdays, Halloween, Hanukkah, and Valentine’s Day.

Invisible labor goes beyond the actions that need to be taken and describes the mental burden of having to pay attention, anticipate, react, track, and keep it all moving like a well-oiled machine. It’s utterly exhausting. 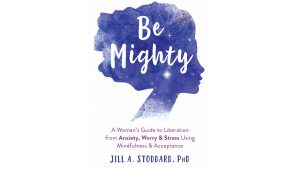 What Can We Do About Invisible Labor?

First, men and women need to be aware of gender roles inside the home, and we need to be having honest, tough conversations. I brought up the Social Security number thing to my husband in an effort to begin a conversation à la “social commentary” and let’s just say it did NOT go well. At first.

But after he got defensive and I got pissed off and discouraged, we sat down and talked. He didn’t come around to “Wow! You’re right! I see it now! I’m on it!” but it’s become a point of playful banter. When the new pediatrician’s office asked for his social, I felt a deep sense of righteous justification and immediately texted to tell him with “INVISIBLE. LABOR.” in the text.

He responded “I remember to feed the dogs tho [referring to my serious dog-feeding-remembering-deficit of which we are both acutely aware] VISIBLE LABOR” in the wise-ass manner I fell in love with 15 years ago, and then followed that up with a NSFW comment that I will respectfully omit here.

The thing is, he wants to be a progressive, “woke” man. AND he’s a human being who naturally becomes defensive when he perceives he’s being criticized (whether that’s the intention or not). Now that we’re joking about it, it’s on his radar. I feel confident that this will elicit change over time (however small or slow). The first time I tried to bring up gender and our uneven distribution of visible labor, OOH EEE. That did not go well either, but a year later, we were splitting the visible work 50/50.

Second, we need to notice, acknowledge, and make space for the feelings associated with setting limits and asking for help (a.k.a. asking for equality). Defying social and cultural norms comes with all sorts of emotions—anxiety, self-doubt, and perhaps most of all, GUILT. We need to stop being driven by these emotions, and instead follow our values. We can feel guilty AND ask our spouses to be in charge of finding and registering for summer camps.

Fourth—and this is a big ask—when we ask our spouses to join the fight for equality by stepping into more of the invisible (and/or visible) labor, we have to let go. They won’t do it in the exact manner or timeframe we desire. That’s ok. It has to be.

In her book, Drop The Ball, Tiffany Dufu recounts a tale of her husband taking over mail duty.  The mail piled up FOR THREE MONTHS and she miraculously let it go. I was having a near panic attack just reading about it, but she let it go. When her husband got to it, it all got done and there were no Armageddon-like consequences. It also really sent a message that his jobs are his jobs.

If we jump in and take over, we risk making our partners feel incompetent and unappreciated.  If they feel this way while we are also removing an aversive task from their list, they are NEVER going to do their part. Understandably. Would you?

For me, my biggest motivator is my kids.  I want them to grow up with a model of men and women evenly sharing the load. I want them to expect an even distribution of labor from their partners and themselves.

When moms continue to “do it all,” we’re not teaching our kids that women are strong superheroes. We’re teaching them that the woman’s role is to sacrifice herself for the men and children. So what might you do to start leveling the playing field?  Perhaps it’s time to show dad where the immunization records are kept or pass him the Tooth Fairy torch. At the very least, maybe you can start by having a conversation about this blog 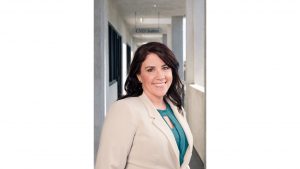 Jill Stoddard is a clinical psychologist and director of The Center for Stress and Anxiety Management in San Diego, CA. She is the co-host of the Psychologists Off The Clock podcast, author of Be Mighty: A Woman’s Guide to Liberation from Anxiety, Worry, and Stress Using Mindfulness and Acceptance, co-author of The Big Book of ACT Metaphors: A Practitioner’s Guide to Experiential Exercises and Metaphors in Acceptance and Commitment Therapy and writes the Be Mighty Blog for Psychology Today. When she’s not writing, speaking, podcasting, or counseling her fierce clients, she’s spending time with her amazing family, friends, and dogs, feeling grateful for this mighty life.