How to Set a Daily Intention: Instructions for a Working Parent 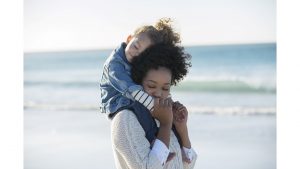 In the chaotic early days of working parenthood, someone suggested I set an intention for my day.  She was certainly well-meaning.  I was clearly – and obviously – floundering.  And I probably (secretly) rolled my eyes at the suggestion.

Feeling as though I had little to lose, however, I agreed to give the silly-seeming idea a try.  It seemed like a light lift.  Didn’t cost anything.  And just as importantly, didn’t seem to take much time.

I committed to setting an intention for my day each morning.  Well, in theory.  Because each day, I promptly forgot I had agreed to do so.  Such is the blurred state of the sleep-deprived parent just trying to keep the family train from flying wildly off its track.  By 5 or 6pm every evening, I’d be beating myself up with “D’oh! I was supposed to set an intention, and now the day’s practically over!  Really helpful practice that is!”

Determined to find a way not to forget, I put in a place a few systems to help me remember.  The earnest effort paid off.  And now, nearly 8 years later, I’m still setting an intention in the mornings.  Every single morning?  No.  Most mornings?  Yes.

As those of you who have read my book, Back to Work After Baby will know, I did two things to help myself remember.  First, I coupled the intention-setting with something I did on a daily basis anyway.  The habit-forming literature says it’s a heck of a lot easier to add an element to an established routine than to create a new routine entirely.  Given I had to (or rather, for the benefit of my then-in-person colleagues I decided to) shower each morning, I decided to multi-task my shower.  Couple a moment of calm with a daily task.

Second, I came up with an acronym to use while I was in the shower to help me remember to set the intention.  The acronym I decided to use was “ISS” (sounds like “is”, a form of “to be”), and it stands for: Intention, Stretch, and Savor.  Set an intention for the day.  Do a few yoga stretches.  And savor the hot water and the few moments alone with no small person attached to me.

My Instruction for You: Pick an activity you already do every morning, and decide to set an intention while you’re doing that activity. 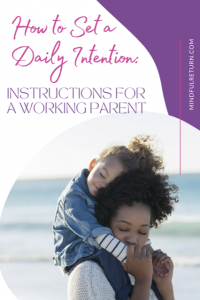 So play along for a moment.  You’ve decided to give this intention-setting thing a try.  You even picked an activity you’ll couple it with so you remember to do it.  Now what?  What on earth is this so-called “intention” you’re setting?

Great question.  Every day, mine is different.  And through various seasons of my life, the nature of them has been different, too.

In the very early days of working parenthood, my intentions often veered toward a commitment to letting go of something (often others’ expectations of me!) or to doing something healthy for myself.  For example, one of my favorites is to start my day with the reminder that “Comparison is the Thief of Joy” top of mind.  “Remember that you are enough today, mama” was a frequent one.  As was “My intention is to go to bed at 9pm tonight, no matter how many bottles and pump parts are still in the sink.”

Over time, the intentions have shifted.  “Go outside today,” was a frequent refrain during the pandemic.  “Be patient with your children,” was necessary during the 15 months of remote school with 2 elementary schoolers.  And “Remember you are loved” never gets old.

These days, I’ve been enjoying getting reacquainted with a wonderful box of cards called the “Art of Attention,” by Elena Brower and Erica Jago.  Each card has a positive affirmation on it, and some have yoga poses on them as well.  The one I pulled out today, for example, said “Believe: Believe that you are a light for someone else.”  Yesterday’s was “Listen: Your simplest listening grants profound healing.”  Yes, please.  More of this sentiment.

For me, using the cards releases the pressure of having to conjure up a grand intention.  And it pushes me to focus on things – good things – I might otherwise not have considered.

My Instruction for You: Think about how you want to feel in your day.  What are some sayings that come to mind that can help you feel that way?  Make a list if you’d like, to have something to turn to.  Or just be inspired by the feeling that meets you each morning.

If there’s one thing I’ve learned in my decade as a working parent, it’s that we often undervalue the outsized impact that incredibly small, almost imperceptible, and seemingly microscopic changes can make in our days and our moods.  Yes, I’ve been on a micro self-care soapbox for a while now.  But for good reason.  Small things like setting an intention really contribute to my overall mood, my anxiety level, and my feeling like I can cope with the world.

For me, setting an intention in the morning is a daily reminder that I have at least some co-creative power in my day.  Yes, there are forces beyond my control.  (Many, many forces.)  And at the same time, there are also ways I can choose to orient myself each day to look at the world in a new way or to make a commitment to myself.

But what if you don’t think about your intention again after setting it?  Was the act of setting it pointless?  Not at all.  I’ll fess up.  Most days, I don’t think about my intention again after the morning.  But the act of defining it for myself points my nose in the direction I want to go for the day.  Which helps me steer the ship of my day into calmer waters from the start.