A Working Mama Heroine on the Big Screen: Incredibles 2 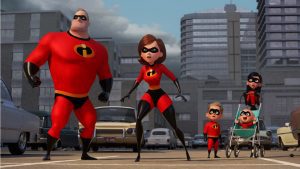 It seems I have a better chance of getting to the movies over the summer than during other seasons. Last year, I was blown away by the amazing feminine powers of Wonder Woman (and blogged about the lessons we could learn from her as working parents, here).  This year, I got some high-quality chuckles out of a trip to Incredibles 2 with my husband and boys.

First, I’ll just note what a delight it is to be able to go to a movie theater with children and sit through the entire movie.  We saw Incredibles 2 with three boys in tow (ages 7, 5, and 5), and none of the five of us exited the theater during the film. (Okay, so there were a few tears when the mom in the movie got tied up by the bad guys, but still, we didn’t leave the theater.)  Stunning and miraculous.  Another milestone: one of the three boys was my youngest son’s best friend, which was the first time we’ve done a movie theater play date.  Life is good.

So what about the movie itself?  If anyone asked me what the premise was, I’d say “working mom of 3 children, one of whom is still in diapers, saves the world.”  Well yeah, that might happen every day in working mom life.  But rarely does that story make it to the big screen.

Other than the great animation and humor for all ages that Pixar consistently nails on the head, what I loved most about this movie was that both the protagonist and the antagonist were women.  The good guy and the bad guy?  In a cartoon super hero move?  Yep.

Elastigirl, the mom in the movie, reflected to audiences the exact emotions I hear time and time again from the mamas who take the Mindful Return course.  Worry about how things will go at home when they travel for work.  Giddiness at landing big roles.  Not wanting to miss baby “firsts.”  Disney/Pixar got those emotions spot on.  And the name “Elastigirl” used for a working mom?  No explanation needed.

As for Mr. Incredible, the dad, I’d give the script writers a mixed review.  As my husband noted, Mr. Incredible’s reaction to his wife’s heading back out into the working world, being selected for a role bigger than his, and her career success “were pretty 1970’s.”  But they did a decent job at making him out to be a competent guy who figured things out as he went along, rather than a bumbling dad buffoon.  I’ve certainly seen that unshaven “I haven’t slept in 36 hours” look in real life, too.  Points for realism there.

Sure, there were clichés galore.  It was a cartoon, after all.  But there were also great laughs, and highly amusing characters.  The baby, for example, was all kinds of awesome.

I’d love to live in a world where the term “working mother” was redundant and strange.  And where highlighting the struggles of working moms isn’t a “thing.” I don’t want it to be notable that the protagonist and antagonist in a superhero film were women. Nevertheless, I found myself cheering during the movie that some of my own life experiences were being reflected in the plot line.  That characters were speaking up in frustration at men stealing their ideas and taking credit.  And that families can truly act as a team and support one another in their life missions.

Final note: the bad guy’s weapon of choice in the movie is screens.  Yes, screens.  The movie definitely reflects the times.

It took Disney/Pixar 14 years to make Incredibles 2 after making the original. But all in all, it was worth the wait. Definitely take the kids and get some popcorn. 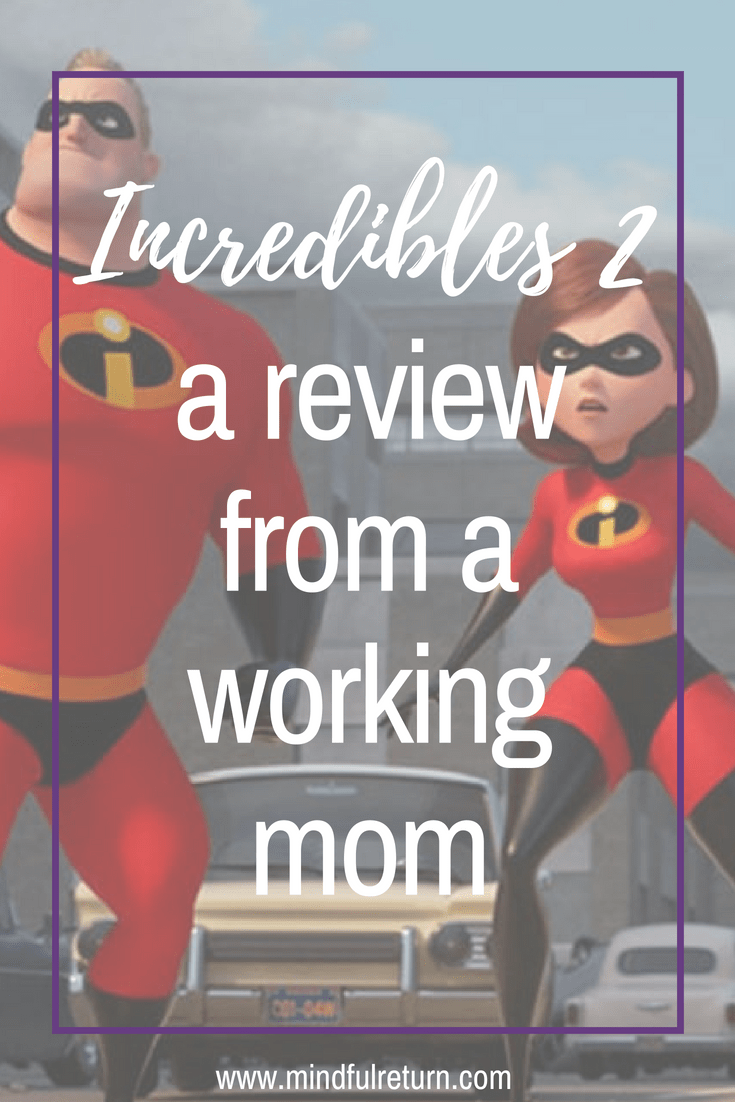 Be a calmer working mama.  Join the thriving Mindful Return community to receive our beloved, short, weekly newsletter.  We’re here to help you feel empowered to trade your mama guilt for meaningful connection.