I Love the Sound of a Glass Ceiling Cracking

What does a glass ceiling sound like when it cracks? 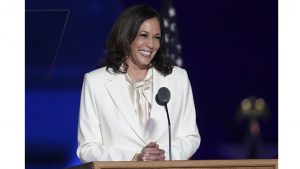 For me, it’s like the dessert I’ve been waiting for during the entire meal.  It’s the sound of the spoon that tap-tap-taps the surface of a perfectly-fired crème brûlée.  (Like this scene, from the wonderful French film, Amélie.)

The hardened sugar doesn’t break the first time the spoon attacks.  But when it crumbles, OH!  The shattering sound cracks through to a delectable sweetness.  Worthy of plate-licking.

Though I’m not sure I’ve ever cried tears of joy over the breaking of a crème brûlée, my eyes and cheeks were flooded when I watched Vice President-Elect Kamala Harris speak this past weekend.

In the United States, the glass ceiling keeping women from the Vice Presidency – and the Presidency – has remained firmly in tact since the dawn of our nation.  Hundreds of years.  Literally, hundreds.

So I celebrated and cheered in the street last weekend.  And wanted to keep licking my plate.

Which led me to wondering where exactly the term “glass ceiling” originated.  It turns out my analogy to a French dessert wasn’t all that far off (at least geographically).

One of the first recorded instances of the concept of a glass ceiling is, in fact, French.

Novelist Amantine Lucile Aurore Dupin, best known by her pen name, George Sand, used a similar phrase, une voûte de cristal impénétrable, in a passage of her 1839 play, Gabriel: “I was a woman; for suddenly my wings collapsed, ether closed in around my head like an impenetrable crystal vault, and I fell….” [emphasis added].  (See Elizabeth Harlan’s 2008 book, George Sand.)

The first recorded time the phrase “invisible glass ceiling” was used in English was by Mary Loden, in a 1978 panel about women’s aspirations.  And it’s become part of our daily lexicon over the past 40 years. 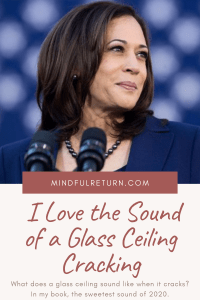 Later, our federal government actually focused on the issue.  Did you know that Congress created something called the “Glass Ceiling Commission” as part of Title II of the Civil Rights Act of 1991?  The 21-member Presidential Commission was created to study the “barriers to the advancement of minorities and women within corporate hierarchies[,] to issue a report on its findings and conclusions, and to make recommendations on ways to dis- mantle the glass ceiling.” The commission conducted extensive research including surveys, public hearings and interviews, and released their findings in 1995 in a report entitled “Good for Business.”

Back to elections, though.  The first time I ever “voted” was on the auditorium stage of my elementary school in 1984.  I was in kindergarten, and I cast my paper ballot for Geraldine Ferraro, who was running for Vice President that year on a ticket with Walter Mondale.  I didn’t know a thing about politics at the time, but I knew, very clearly, that I had just voted for a woman.  One tap on the crème brûlée.  But it didn’t crack then.

The next time I had an opportunity to vote for a woman on a major party’s ticket was 2008 (when Sarah Palin ran with John McCain, a ticket I admit I skipped over in favor of other values).  And then I cast an enthusiastic ballot for Hillary Clinton in 2016.  More taps on the crème brûlée.  More pick axes attacking the glass ceiling.  But it didn’t crack those years either.

And now, finally, Kamala Harris has done it.  “I may be the first woman in this office, I won’t be the last.”  Amen, sister.

In a pandemic world where millions of women have been pushed out of their jobs and the share of women in the workforce is down to levels not seen since 1988, the Biden-Harris win is a huge bright spot.

I’ve cried many tears this year, but they haven’t been tears of joy.  For me, the cracking of this particular glass ceiling was perhaps the sweetest sound I’ve heard in 2020.