Even Just One Day Away: *Why* We Undervalue Small Steps 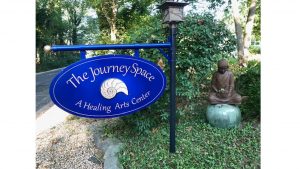 I tend to undervalue the power of small actions.  Of small amounts of time.  Of single, striking conversations.  And I don’t think I’m alone in doing this.

Working parenthood is so often a blur of color.  A flurry of activity.  A race against the clock.  It seems we tend to say “I’ll get to that later, when my kids are older.”  Or perhaps “I’ll make changes in my life when I’m sleeping more.”  Anytime but now.

Last week, I led a one-day retreat at a center called The Journey Space for alumnae of the Mindful Return program – all working mamas with one, two, and in one case, four children.  None of whom has much margin in her day.

We gathered for only 6 of the 168 hours that comprised last week.  Just 3.5% of the week.  And to me, at least, that relatively small amount of time felt like a wide open expanse of clear sky.  When I look back on the day, even only a week later, I can feel that it had a disproportionately positive effect on my mood.  My perspective and confidence.  My feeling of being held by a community.  And I witnessed this for the mamas who were there, too.

*Why* Do We Undervalue Small Steps?

This past Sunday, I overheard our Rabbi explaining to a group of sixth graders why the task they were about to complete – stapling an instruction paper onto a brown shopping bag – was incredibly important.  The instructions were for an underwear drive that the synagogue conducts every year, through which thousands of pairs of new underwear are collected for a homeless shelter in D.C.  “If you don’t provide these instructions,” he noted, ” people won’t know what to donate.  “The bags won’t get filled.  And people who really need this underwear – who count on us for it year in and year out – won’t get it.”  A huge project truly all starts with one staple.

But one staple seems boring.  It seems irrelevant.  It seems like it doesn’t matter.  Sometimes, we undervalue the little things, because they’re not complicated.  They’re not rocket science.

Another way we undervalue small steps is that we make up the following story: to reach our grandiose goal (let’s say starting a blog, or changing jobs), we need HUGE swaths of time.

I recently reached out to a leadership coach I did quite a bit of work with years ago, to seek her help with one of my own life transitions.  A single hour on the phone with her completely shifted my mindset.  Only sixty minutes to teach myself to think in a new way?  Now that is power in small moments.

We also undervalue the little things, because we think we have “later” to do them.  But do we?  The truth is, we don’t really know.

And finally, we think the little steps aren’t important, because we’re scared.  If we’re being honest, we’re terrified that they may, in fact, lead to something big.  That we may have more power than we think we do.

Motivating Ourselves to Go for the Small

Think back to a time when a small commitment you made wound up having a disproportionately large impact on your life.  Reflecting back and realizing how the amount of time you spend doing something and the impact it has on your life are not necessarily correlated can be an amazing motivator.

Remind yourself that small things add up, too.

You know those big things you want in life, mama?  They are there for the taking, one tiny step at a time.  Even just one day, one hour, one breath, can change your trajectory.