Travels with Just One of My Boys: A Story of One-on-One Bonding Time 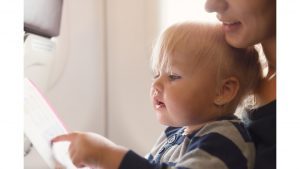 Earlier this spring, as the cherry blossoms were blooming and the pollen was just starting to tickle my nose, my redheaded family of four went on an outing to a Washington Nationals baseball game.  My 7-year old was riveted, glued to his seat the entire game, refusing to get up even to venture to the ice cream stand.  My 5-year old, in contrast, was less than thrilled.  “Guess what, Mommy?” my little guy announced after the game.  “I understand baseball now.  And I still don’t like it!”

Deciding to Give One-on-One Travel a Try

It was in that moment that we decided spending a fortune on tickets to see the Home Run Derby and All Star Game probably wasn’t the best idea for a 5-year old with little interest in baseball.  The All Star Game was, for the first time in 49 years, being held here in DC later in the summer.  And for my oldest, going to the game with his Daddy was a dream come true.  He had be talking about it for the past 18 months.  Literally.

Rather than subject my little guy to more baseball torture, I planned a solo trip with him to North Carolina the same week as the All Star Game.

There’s a First Time for Everything

I travel quite a bit for work, so am used to traveling alone, away from my kiddos for a few days at a time.  Early on in my babies’ lives, this was a stressful experience (see The Blues and Bliss of Work Travel After Baby), but now it’s actually quite wonderful.  Airplane rides with no one who knows you?  Quiet nights in a hotel room?  Aahh.

And when we travel to see family or go on a vacation, we tend to travel as a family herd.  Even day-to-day, you’ll often see the four of us together as a pack, at school or camp drop-off or pick-up.  My husband and I have gotten away on short trips, just the two of us, a few times over the past few years, too.

But never, in my 5 1/2 years of being a parent of two, had I ventured for more than a couple of hours with just one of my little cherubs.

Yes, I’d taken a “Mommy-S Day” or “Mommy-C Day” here and there (see 4 Tips for Spending One-on-One Time with Each Child).  But I’d never taken just one of them on a plane ride before.  The prospect of a long stretch alone with one son admittedly filled me both with glee and some terror.  Yes, I figured there would be fun bonding time and snuggles.  But I also worried about being attached to my 5-year old every single moment of every day for 5 days.

Now, having been away on that trip, I am happy to report that the joy of being solo with him was even greater than I had anticipated.  And the worries I’d had were completely unfounded.  (Isn’t that usually the way?)

First, I just have to say that we had SO much fun.  Real laugh-out-loud, giggle, tickle-monster sorts of fun. “Were you born wacky?” is a question we often ask my little guy, and he comes by his “YES!” answer honestly.

Before our trip, he had gotten into a habit of making decisions based on whatever his older brother chose.  “What flavor ice cream do you want, S?”  And his response?  “Whatever C is having.”  “Do you want milk or water with dinner?”  His response? “What’s C having?”  This trip gave him a chance to really decide for himself what *he* wanted, and run with it.

And run with things, he did!  He *loved* the opportunity to be the captain of our little, two-person family ship.  The decider of our next move.  The inspector of the sidewalk bugs.  For the most part, I let him lead many of our choices and activities during our trip.  He was continuously delighted by the power of his decisions and didn’t have to haggle with his brother over what we did next.

Speaking of no haggling, there was such sweet delight (and such quiet!!) in the absence of the tension that comes with any normal sibling interaction.  For once, no one was fighting over… *me*!  There was no need to take turns.  Or negotiate who got to sit on my left versus my right, or who got to throw the ball to the dog next.  There was no need to decide who got to order the first ice cream.  Happy sighs.

Did the Boys Miss One Another?

I did wonder how the boys would do being apart from one another for the first time in their lives.  And that, too, turned out to be a-okay.  The morning after our return, my oldest turned to my youngest and asked, “did you miss me?”  “Of course not,” said the youngest, and then asked, “did you miss me?”  “Why would I?” retorted the oldest.  And then, “let’s go play!!!”  And they were off, kicking a soccer ball to one another in the dining room.

As a big believer in fairness and equality, I’ve told my older son I’ll take him solo on the next trip.  I’m already excited for that next adventure.

Be a calmer working mama.  Join the thriving Mindful Return community to receive our beloved, short, weekly newsletter.  We’re here to help you feel empowered to trade your mama guilt for meaningful connection.