Proof That Stopping Speeds Us Up: The 1,000 Piece Harry Potter Puzzle 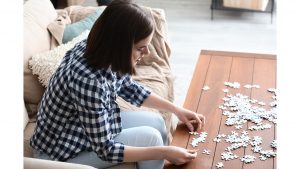 If someone suggested stopping your work as a way to make it go faster, what would you think?  It’s counter-intuitive, right?  How could stopping something possibly help the doing of it go faster?

The “I don’t have time to stop,” refrain is blaring in working parent communities right now.  The work keeps coming at us fast and furious.  If I stopped, I’d never catch up.  If I shut down, I will fail.  And if I take a break – a real one, just for me – everything won’t get done.

I admit I’ve been in the same camp.  Thinking that I couldn’t stop until my to-do list was done.  Yes, practicing shutting down at a certain time each night has been healthy for me.  But it didn’t convince me that stopping actually made me go faster.

That’s where the Harry Potter puzzle story comes in.

Pre-pandmic, my older son got a 1,000 piece Harry Potter Puzzle as a gift.  (It’s made by the same company that made this one.)  We hadn’t taken the time to open it before COVID struck, but now that we’re home, it got on the list of things-that-were-sitting-around-unused-but-that-are-now-entertainment-worthy.  I was, I admit, more excited to work on it than my son was.  And so it goes.

Each night, I like to work on the puzzle for about 5 minutes before putting my kids to sleep.  And in the nights leading up to a week-long trip we took at the end of August, I was averaging perhaps 1 puzzle piece per night.  Two if I was lucky.  I thought that was just how it went.  Big, hard puzzle.  Slow-going work to find a home for the pieces.

And then.  We came back from a week of vacation.  I sat down with the puzzle as usual, and within the span of perhaps 3 minutes I had found homes for at least 6 pieces.  “What the heck?!”  I declared, marveling at my new-found speed.  The following night, I was just as quick.  5 or 6 pieces, no problem.

Then, as our vacation glow dimmed, so did my puzzle speed.  Within a week or two, I was back to my same 1-2 piece per night tempo.  So I tried it again.  Took a break from the puzzle over the weekend while I got more sleep, played more with my kids, and generally restored myself.  And guess what happened when I went back to the puzzle on Monday.  Yep.  Lightening.

Was this all Harry Potter magic, or was it oh, maybe neuroscience? 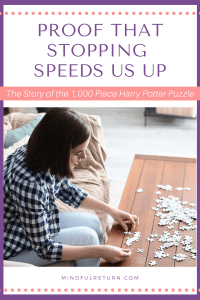 Stopping Lets Our Back Burner Simmer

I remember sitting in a class in high school called Humanities, in which my own violin teacher had come in as a guest lecturer.  In addition to teaching private lessons, he was also a composer.  As I sat in the classroom that day, I remember being startled when he described how he composed the most music when he was not composing music.

Yes, that’s right.  He said that the most important part of composing was planting the seed and then walking away from it.  “Letting it simmer on the back burner,” as he called it.

In our current work lives, I don’t think we let our back burners do enough of the work.  We stand there stirring and stirring the pot on our front burners until our arms are ready to fall off.  And we forget there are other heat sources we could be engaging for our efforts.

Telling Yourself You Can’t Stop Is Just a Story

When you tell yourself, “I don’t have time to stop and take a break,” it’s nothing more than a story you are telling yourself.  And one that happens not to be true.  If you unplugged and took a 20 minute exercise break today, might you get your work done faster this afternoon?  If you went for a walk alone this weekend for an hour, would your family meet its demise in your absence?

There’s only one way to find out.  Go ahead.  Experiment with it.  Stopping work can actually speed it up.  Don’t believe me?  Dig into a 1,000 piece puzzle and observe your own speed.