When Our Kids are Scared of Shots and Needles 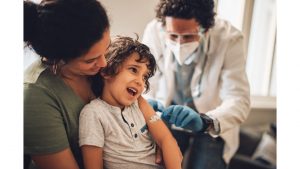 I’ll admit, I was that kid who screamed in terror at her fear of shots and needles.  Yes, I made a huge scene at the pediatrician’s office around the age of 12 or 13.  I remember having a toddler-type temper tantrum in a teenager’s body in the room where I was being given my vaccines.  After the appointment, my mother declared she was never going to be the parent who took me to the doctor’s office again.  If I recall correctly, she kept her word, at least for the next shot-related appointment.

I used to be so embarrassed of this story.  But now that I’m much older and have a child with shot fears of his own, I look at it much differently.  Back then, and specifically in my family of origin, we didn’t talk about things that scared us.  We were meant to keep a stiff upper lip.  Push through anything challenging.  And not talk about it afterward.  My fears were met with embarrassment and shame, rather than compassion, empathy, or even problem solving.

Fortunately, times are different, and the family I’ve grown as an adult is different.  I also feel like parenting around the topic of shots and needles has been a homework assignment for me.  One that’s helped me to learn and grow.

I remember the first few shots my oldest son got as a baby.  That moment of horror on his face after the shot was administered, having not known what was coming.  The pause between the shock and the initially silent and then blood-curdling scream that followed.  By the time he got to be 6 or 9 months old, it amazed me that he could spot the perpetrator from a distance.  The moment “shot-giving nurse” came into his line of sight, he’d start screaming in terror.  Baby recall is amazing to me.

As my kids got older, they went through many of the stages kids often do around shots.  They are now in elementary school, and one of my boys still struggles fairly mightily with a fear of needles.  (Which has a name, by the way: trypanophobia.)

I typically don’t say much here on the blog about my own children’s challenges, out of respect for their privacy.  Today, though, given this important moment in the history of a global pandemic, when 5-12 year olds in the US can now receive their COVID vaccines, I’m going out on a limb in sharing, in the hopes that my experience might help others. 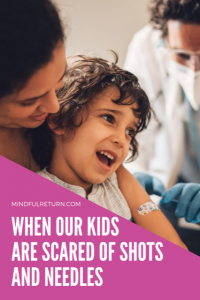 Helping Our Kids with Their Fears of Shots

Several years ago, my husband was away on business travel the same weekend as my kids’ flu shots were scheduled.  Knowing my kids’ history with flu shots (yes, the screaming and tears), I did what any reasonable parent would do.  I offered a reward for cooperation.  What was this reward, you ask?  If the shot-giving process went off without a hitch, they could each choose one item – any item – from the Giant grocery store.

Bribery worked, and my youngest came home with 3 Matchbox cars (yes, that’s more than one item, but they were $1/car, so I relented).  My oldest came home with an Oreo Cookie ice cream cake for the whole family to enjoy.  We’ve continued this tradition.  But now, my kids know that you can get whole lobsters and sushi platters at the Giant.  Damn.

Rewards are fun and, to my mind, worthwhile, but they don’t address the fear directly.  For one of my sons, the reward is enough to calm him down.  For the other son, not so much.

What has helped for a more intense fear?

Eventually, We Learn to Cope

Somehow, one day, I was able to develop an approach to my own fears of needles that works for me, and I hope the same will be true for my son one day.  For me, I’ve found that telling the shot-giver that I’m a needlephobe and won’t be looking at the shot helps.  I close my eyes during the whole process and look away.  I also visualize a place where I am calm, happy, comforted, and loved.  And as anyone reading this blog post knows, it’s over before you know it.

Last night, I went to CVS to get my own COVID booster.  (I got J&J originally and did the mix-and-match with Pfizer.)  I noticed the tightness in my own chest as I approached the pharmacy.  And rather than berating myself for my own fears or telling myself to just tough it out, I now take a more compassionate approach.  I did a centering practice of 4 breaths in and 6 breaths out while I waited in line.  Then, when my turn came for the shot-giving chair, I closed my eyes and imagined myself snuggled up under a weighted blanket on a couch with a few of my favorite people.  It was over in moments.  Though my arm is still sore while I type this.