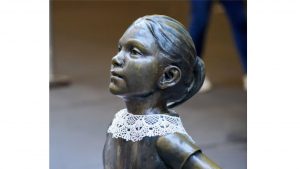 I’m struggling mightily in writing this RBG-related post.  Mostly because every time I sit down to write about Justice Ruth Bader Ginsburg, I’m overcome with shock that she’s gone.  Despair for the Supreme Court.  And the general fear of not having anything new to contribute to this conversation.  A million articles, it seems have been written about her since her passing a week ago.  I don’t have any cool photos with her.  I didn’t ever meet her in person.

And yet.  I couldn’t say nothing.  Especially on a blog that’s committed to normalizing working parenthood.

The evening she passed, as we all know, was the start of Rosh Hashanah – the start of the Jewish New Year.  Our family had just finished laughing hysterically at Steven Martin, Martin Short, and Chevy Chase in The 3 Amigos (inspired by having seen Father of the Bride the week before).  And we had just indulged in some challah straight out of the oven and matzah ball soup.  That the nation could be so rocked in that very instant was the furthest thing from my mind. 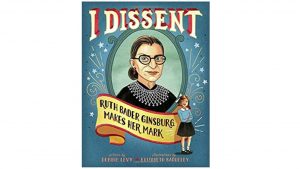 When I got the news, like many, I gasped.  My oldest son’s first comment was to reference the children’s book in his room, I Dissent: Ruth Bader Ginsburg Makes Her Mark.  And the air seemed to leave the house.

For sanity reasons, I normally don’t watch the news.  But that night, I couldn’t peel myself away from CNN.  I watched as flowers piled up outside the Supreme Court.  I heard Dana Bash tell her story of her son’s running to get his copy of I Dissent.  And agreed wholeheartedly with Dana that if 9 year old boys were fond of this woman, she was truly a rock star.  I watched my college classmate Laura Coates give a brilliant assessment of RBG’s accomplishments and the current political state.  And I cried.

What RBG Started, We Must Continue

This week, you may have heard Justice Ginsburg’s story of having suffered blatant pay discrimination as a professor at Rutgers Law School.  When RBG inquired about her pay vis à vis her male colleagues, she was told she was being paid less, because her husband had a good job, and the male colleagues had families to support.  Ugh.

Thanks to RBG, we’ve made huge strides toward gender equality under the law.  Would I have even gone to law school without her and her 8 other women law school classmates having blazed the path?

And yet while these types of sexist statements would probably no longer be said out loud, it doesn’t mean their sentiment is gone.  Case in point: A ridiculously large number of new mothers are still afraid to announce their pregnancies to their managers.

New parents’ concerns – particularly those of new mothers – are sadly grounded in unfortunate data.  As Brigid Schulte explains in her truly excellent book, Overwhelmed: Work, Love and Play When No One Has the Time:

Research has found that mothers are seen as less committed to work than nonmothers.  Pregnant women are perceived as less authoritative and more irrational, regardless of their actual performance.  One family responsibilities discrimination case quoted an employer calling employed mothers ‘incompetent and lazy.’

Schulte goes on to explain the important concepts of the “motherhood penalty” and the “fatherhood bonus.”  This important passage from Schulte’s book (pages 79-80) is worth a read:

To gauge how notions of the ideal worker and caregiver bias influence hiring, promotions, and pay, Shelley J. Correll, Stephen Benard, and In Paik, then all at Cornell University, wrote a fictitious résumé for a person applying for a marketing job.

The researchers gave the résumés to nearly two hundred students and asked them to judge which one, the mother, the father, the childless woman, or the childless man, was the best worker. 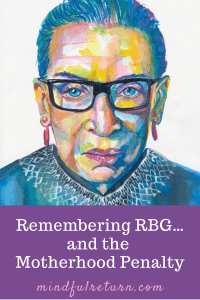 Mothers ranked at the very bottom.  They were rated as significantly less competent, less intelligent, and less committed than women without children.  Mothers were held to harsher performance and punctuality standards and had to score significantly higher on a management exam than nonmothers to be considered for the position.  The recommended starting salary for mothers was $11,000 less than for nonmothers and far less than what students recommended fathers receive.  The students also rated mothers as less promotable.  In the end, they recommended that only 47 percent of the mothers be hired, compared to 84 percent of the nonmothers.

To test what the researchers came to call this ‘motherhood penalty’ and ‘fatherhood bonus’ in the real world, the first such study of its kind – they perused the newspaper help-wanted ads in a large northeastern city and sent out 1,276 résumés to 638 employers advertising entry-level and midlevel marketing and business positions.  Just as in the lab experiment, the researchers sent each company a pair of nearly identical résumés, safe for one detail: One was a parent and one was not.  Consistent with their lab findings, fathers were called back at a slightly higher rate than nonfathers.  But mothers received only half the offers of nonmothers.

Working mothers are judged unfairly not only as workers but also as mothers.  Studies have found that employed mothers are seen as more selfish and less dedicated to their children than at-home moms, especially if they are thought to be working because they want to, rather than being forced to in order to make ends meet.

No wonder just walking out the door in the morning as a working mother can be so fraught.  Already, you’re judged as guilty at best, a jerk, or worse.  As Joan Williams told me, ‘You just walk around feeling polluted.’

This study Schulte describes didn’t take place in the 1950’s.  We’re talking about the 21st Century, where assumptions and discrimination against caregivers still abound.  If you think you’re free of biases toward women in the workplace (or want to help illuminate these biases for your colleagues), head over and take Harvard’s implicit bias test (the IAT) and take the one specifically about women and work.  Share it with your managers and colleagues.

RBG Gave Voice to What So Many Working Parents Feel 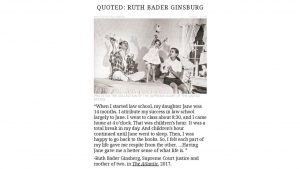 The RBG quote that has perhaps touched me the most as a working parent is what Justice Ginsberg said about having a child while in law school:

“When I started law school, my daughter Jane was 14 months.  I attribute my success in law school largely to Jane.  I went to class about 8:30, and I came home at 4 o’clock.  That was children’s hour.  It was a total break in my day.  And children’s hour continued until Jane went to sleep.  Then, I was happy to go back to the books.  So, I felt each part of my life gave me respite from the other…Having Jane gave me a better sense of what life is.”

This past week, I learned from my Jewish mama community that the Hebrew word for crisis, mashber, is also the same root word used to describe a birthing stool, on which a Jewish woman sat as she gave birth.  May the current crisis that is 2020 be for all of us the opportunity to birth a new world into being.  One in which RBG’s vision of an equal world is even more of a reality.