Preparing to March Against Gun Violence – With My Children 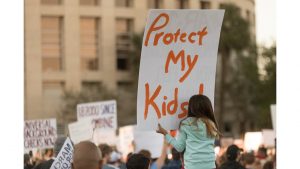 There are many reasons I am taking to the streets to march today.  Uvalde.  Buffalo.  Children.  Humans.  Innocence.  Senselessness.  Helplessness.  Fear.  Rage.  I’m feeling all the things as I’m typing this.

Like many of you reading this post, I’ve been struggling in the wake of the massacres in Buffalo and Uvalde (and elsewhere) to know how to help.  Or whom to call.  (I live in DC and have no elected officials.  #DCStatehood.)  Or where to donate.  (I started with Everytown.)  And whether anything I can do will even matter.

I don’t have good answers other than that for me, “doing nothing” is no longer an option.  Today, my husband, boys, and I will be going down to the National Mall in Washington, DC to join the March for Our Lives.  This march will be happening not only in DC today but in more than 300 other cities across the country as well.

To Bring Children to the March or Not?

For me, as an adult who can make decisions about my own activities and whereabouts, it was easy to decide that I was going to attend today’s march.  Yes, I have my own gun-related demons (more below) that could trigger me by going, but I can stand up to those memories now.

Whether to bring my 9 and 11 year olds with me is another question entirely.  It’s not so much the crowds or logistics I’m worried about.  Though these things can admittedly be hard to navigate with children.  We took our boys to the Women’s March a number of years ago, and somehow, we managed that even with a stroller.  It’s more the fear of violence itself that leads my mama bear instinct to want to protect them from any threat of danger.

Thinking hard about this question over the past few weeks, though, I’ve arrived at a number of conclusions.  First, I want to teach my kids that we don’t hide at home when we’re scared.  That our voices matter.  And that we can stand in a long, long history of effective and peaceful protestors who walked these very same steps on the National Mall for so many important causes.

I find it reassuring that we’ll be surrounded by many, many others who share our disgust with the status quo and our desire for change.  If and when we encounter opponents to our position, though, I’ve decided that I can call on the advice I give my sons daily about dealing with bullies.  That is, we know that bullies only react when they know they have an effect on you.  We can consciously disengage from anyone trying to argue with us while we March.  We can walk away.

It is also really important to me that we talk to our kids about safety.  About staying near us at all times.  Carrying our contact information on their bodies.  And listening to us the first time we make a request.  (We’ll see how that one goes!)

In all, I’m trying to strike a tone of communicating messages of safety while also not instilling fear or panic in them.  I want to raise children who care about what’s happening in their world, and who are not afraid to stand up for humanity and justice.  So yes, they will be coming with us today. 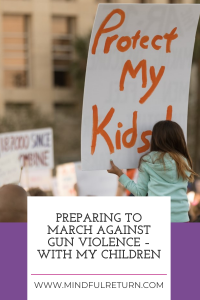 Growing Up with Guns at Home: Another Reason I’m Marching Today

Another reason I am committed to marching today, is that 4.6 million children in the United States live in a home with unsecured guns.  And I was one of them.

In my household growing up, guns were like furniture.  Just part of the landscape of the house.  Our so-called “toy room” in the downstairs part of our bi-level in Pennsylvania had puzzles, and games, and Legos on one side.  But it doubled for my birth father’s gun, bullet, and knife play-space on the other side.  (Note: this birth father is not the same person I have the honor of calling “Dad” now.)  If I had to tell you exactly how many guns were in our home, I couldn’t.  Between 5 and 12, if I had to guess.

Many of these guns were hunting rifles, sitting in an unlocked gun cabinet.  The ammunition was in tubs, and crates, and tins stacked higher than I was tall.  Another gun in the house was a Glock – a semi-automatic pistol that my father carried for work as a state investigator.  Every day, he’d take it off his belt and put it (again, unlocked) up on top of his clothes dresser.  Out of reach of a small child, perhaps.  But not out of reach of anyone who could stand on a chair.

My father felt it to be his obligation to teach me how to load and unload (and ultimately shoot) the guns.  I remember the bullets and the cartridges in vivid detail.  And yes, he told me not to touch them when he wasn’t home.  But the guns were unlocked, the ammunition was right there, and the onus was on me to listen.  What if I hadn’t been so “obedient” as a kid?  What if I hadn’t been a rule-following goody-two shoes?  Or what if I had simply been joking around or playing with the guns one day?  I can’t bear to think of what might have happened.

Another Dimension of Gun Trauma

I wanted to add one more dimension to the guns + trauma conversation, though.  For me, the presence of guns in my home – guns that could be accessed at any time, by anyone – robbed me of a sense of bodily safety from a young age.  It’s only been in adulthood that I’ve started to come to terms with and get help for my anxiety.  Much of which was instilled in me by a father full of rage and a home full of weapons.

The presence of guns within a household adds, I believe, a terrifying and coercive power element to a home.  When I was growing up, no humans got shot.  There was no “gun violence” in the traditional sense of the term.  But the threat of the guns – coupled with my father’s violent personality, alcoholism, and volatile mood – was always, always there.  Haunting me into many things, like silence, and straight As.

Preparing Myself Mentally for the March

Just as important as packing water, sunscreen, snacks, and cell phones for the march, has been preparing myself mentally to go.  Picturing myself as a leader in my family and a teacher for my children helps me to get into an empowered head space to make the Metro trip downtown.

I’m also actively committing to a breathing practice, for when the crowds overwhelm me.  And a patience practice with my kids.  Though I’m certain I will be entirely imperfect at this, I want to model peace and compassion today.  I’ll likely get anxious or hungry or tired or annoyed at some point.  But I’m committing to not making my response toward my kids one of anger or aggression.  After all, violence is what we are going to protest today.

When I was a kid, and I had no voice and no power in my home, I was still drawn toward activism.  I used to take the “postage paid by addressee” envelopes my father received as inserts in his NRA magazines and mail them back to the NRA with no money in them.  I took secret delight in causing the gun lobby to waste stamp money.

Now that I’m older, I can have more of a voice than surreptitious postage resistance.  And I intend to use it.  Maybe I’ll see you at the march this afternoon.