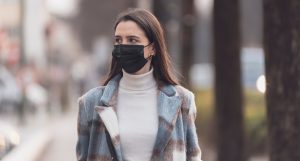 Two whole years of comparatively little social interaction has me thinking more these days about, well, social interaction.  I’m an introvert-leaning ambivert who left my law firm gig last summer to work 100% for myself, from my home office.   (Personal update: I’ve been splitting my time about 2/3 Mindful Return, and 1/3 my own law firm, and I’m truly loving this new career path.)

Do I miss going into an office?  No.  Do I miss in-person adult conversations?  Some of them, no.  But many of them, yes.

The First Step is Recognizing You Have a Problem…

A few weeks ago, my family piled in to our minivan to head up to Maryland.  Our synagogue was holding a Sunday-morning outdoor event at a retreat center about an hour from our home, and the temperature was around 17 degrees.  Kids were meant to head off in groups by age, and a separate hike was planned for the adults.  A hike?  Just for adults?  Where we could actually talk to one another without our little ones present?  It sounded too good to be true.

And sadly, for me, it was.  My youngest had a meltdown over cold toes immediately upon arrival, and I wound up spending an hour in the car with him rather than out with our respective age-group cohorts.

Playing the “big deal or little deal” game my kids learned in guidance class at school, this was objectively a “little deal.”  Then why were big, fat tears rolling down my face as I sat in the minivan with my son, waiting for my husband and other child to finish their activities?

Because I’m human, that’s why.  And because without even realizing it, I’d been hanging a disproportionate amount of hope for social connection on a single opportunity for adult in-person interaction.  Paying attention to my own big emotions usually tells me something.  This time, it was telling me I was starving for in-person time with other grownups. 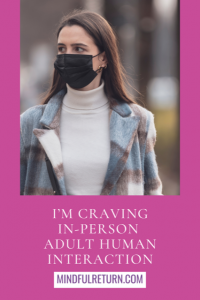 Soon after this event, and quite by happenstance, I participated in two adult-only large-group gatherings.  The first was a book talk at the historic Sixth and I Synagogue in downtown Washington, DC, celebrating the launch of Dan Pink’s newest book, The Power of Regret.  (Synopsis: according to Pink, having regrets is completely normal, and we have much to learn from them.)

I sat there with my husband, in a sea of masked and vaccinated attendees, thinking “Wow – strangers I haven’t seen before!  This is amazing!”  Yes, there are plenty of other grown-ups on the playground whom I don’t know…but those are the “familiar strangers” I see every day.  This group was full of completely new strangers.  It was exhilarating just to be out and among them.  Though it admittedly felt a bit novel and odd.

Then this past weekend, I attended the first in-person funeral I’ve been to since the pandemic started.  No, a funeral is not an event to be glad about.  But I was happy to be able to be there in person.   The power of being together, in real life, to commemorate someone’s legacy made me realize just how much has indeed been lost in our attempts to convey the same sentiments via Zoom.  I left feeling drained from the experience of “strangers telling stories,” as I described the post-funeral reception to my husband.  But I was comforted by the presence of so many other adults.

The Best Part of My Son’s Birthday Party

In the so-called “before times,” I was among the many who had tired of an abundance of kid birthday parties.  I probably even declared that “if I never go to BounceU again, I’ll die a happy person.”  Turns out I didn’t mean it, though.

My oldest son sadly had to reschedule his (outdoor) birthday party this winter about 5 times.  Once because he had COVID, and around 4 more times because of the weather.  When the party finally happened last week (on a gloriously warm winter day), I was as overjoyed as he was.  Yes, I was happy to see him happy.  But what took a very close second place for me in the list of party joys was the chance to spend time with other parents.  A handful of his friends’ moms and dads graciously stuck around during the party.  And gosh did I come home feeling full of not just sugar and icing, but connection.

What are my takeaways here?  Two years is a really long time to have our normal social patterns interrupted.  I need people, even if I recharge from being alone.  And I soooooo cannot wait for spring, and the outdoor camaraderie opportunities it brings.

In the meantime, before the warm weather, cherry blossoms and pollen appear, I’ll go for a walk with a friend or two to feed that social craving.  Not sure when this walk will happen, though, as my plans for an outing tomorrow morning just got destroyed by a stomach bug.  Those darn day-to-day illnesses are one part of “normal” social interaction I admittedly don’t miss…