Musings on Attending an In-Person Conference 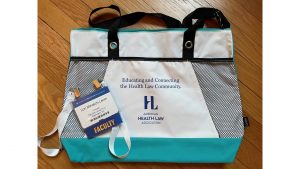 Last week, I attended my first in-person, overnight work conference in over 2 years.  And as I said at the beginning of my talk on the last day, I probably interacted with more real live adult human beings during the 48 hour period I was there than I have during the entire pandemic.  I’m exhausted just thinking about it!

My travels took me not too far away from my home in Washington, D.C., but far enough to warrant sleeping over. The conference I attended was the American Health Law Association’s (AHLA’s) Medicare & Medicaid Institute in Baltimore, MD.  I was there with my lawyer hat on, to present about Medicare payments for graduate medical education.

What was it like to be back at a conference?  For me, it was all the things.  Amazing, refreshing, comforting, inspiring, and gleeful.  And also: strange, daunting, awkward, and draining.

We Were There…But Not All There

The first time I attended this particular conference was around 2006 or 2007, so it’s been part of the rhythm of my legal career for going on two decades.  The meeting is always held at the same hotel near the harbor in Baltimore (to be close to the Medicare and Medicaid regulators, of course).  And pre-COVID, it was always packed.

I remember having to wait hours to get a room at the hotel on the day of check-in.  Once, I was put up in another of the hotel chain’s properties down the street, because they ran out of space at the conference hotel.  And another year, I wound up sleeping on a pull-out couch in one of the bridal-party-type suites, because that was all they had left.  In short, hotel rooms during this conference were always a hot ticket.

What happened this year?  I arrived at the hotel on a Wednesday morning around 10:30am.  I went to the front desk, fully expecting to check my luggage and be told they’d call me later when my room was ready.  “Welcome!  We can get you a room right now,” the man at the front desk greeted me.  “Would you like a room that faces the Harbor?  With a great view on a high floor?”

Believe me, I hadn’t earned any new status with the hotel.  And I certainly hadn’t bribed the registration desk guy.  I later learned that conference registration was down by more than half.  Which explained the wide open stock of rooms.

What else was different?  Room service was a thing of the past.  Room turnover only happened if you called.  And some of the conference presenters spoke to us from Zoom screens rather than a dais. 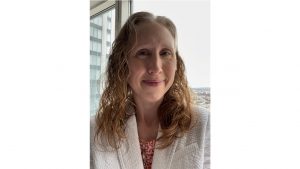 What About Conferences and Masks?

Personally, I’m finding the mask situation to be confusing.  When is the precise moment we’re supposed to just take it off?  Or leave it on?  I struggle with what the “right” answer is.  Mostly because there isn’t a “right” answer.

My kids’ elementary school lifted the mask mandate about 2 weeks ago.  So on one hand, I’m now getting exposed to all the germs they bring home from their classmates.  Wouldn’t it make sense, then, for me to just abandon the mask at the conference, given it wasn’t mandatory there, either?

Somehow, I just couldn’t seem to get my head around that idea. Though I was definitely in the minority.  I’d say probably about 90% of attendees were unmasked during the meeting, and 99% had them off during cocktail hour.

Based on my own personal comfort level, I only took mine off when I was presenting.  But did that level of precaution matter?  My co-presenter was sitting right next to me.  People still came up to me after the talk, before I put my mask back on, and I talked directly with them.  The cocktail hour was so loud I had to shout extra loudly with the mask on to be heard, so I left with a sore throat.

Masks on, masks off.   I don’t know.  I don’t have any good answers and am probably just wearing it out of PTSD at this point.  Oh, and also out of a desire not to get the 2 million other non-COVID bugs that are now going around. 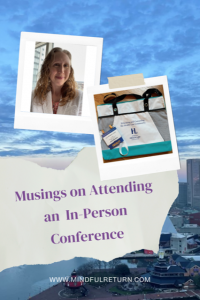 Last year, I attended this conference when it was held virtually.  And though AHLA did an excellent job of coordinating the event, it left me feeling empty.

As presenters, we had to record our sessions in advance and then show up to the conference session at a given time to watch ourselves and answer questions in the comment boxes.  Ugh.  There’s perhaps nothing worse than (1) feeling like you’re talking to yourself while giving a presentation.  And then (2) being required to watch yourself give the presentation where you originally talked to yourself!

So this year was a relief.  Being there with real, live human beings in the audience came with a renewed sense of thrill for me.  People from the audience raised their hands and asked questions.  In person!  With their own voices!  Huzzah!

While I was at the conference, I got a question from a client about a particularly thorny regulatory issue.  And my fellow regulatory attorneys were right there, in person, excited to bat around ideas about the scenario.  It was Medicare nerd heaven.  (Yes, I recognize how sad this sounds.  Don’t worry, I try not to talk too much about my legal job in non-AHLA happy hours.)

I spent two nights away from dish washing and laundry.  I saw my boys via FaceTime each day, learned new things, and reconnected with colleagues.  And every morning, I woke up to a gorgeous sunrise over the Harbor.  Oh yes, there was joy in being back at an in-person conference.  So much joy.